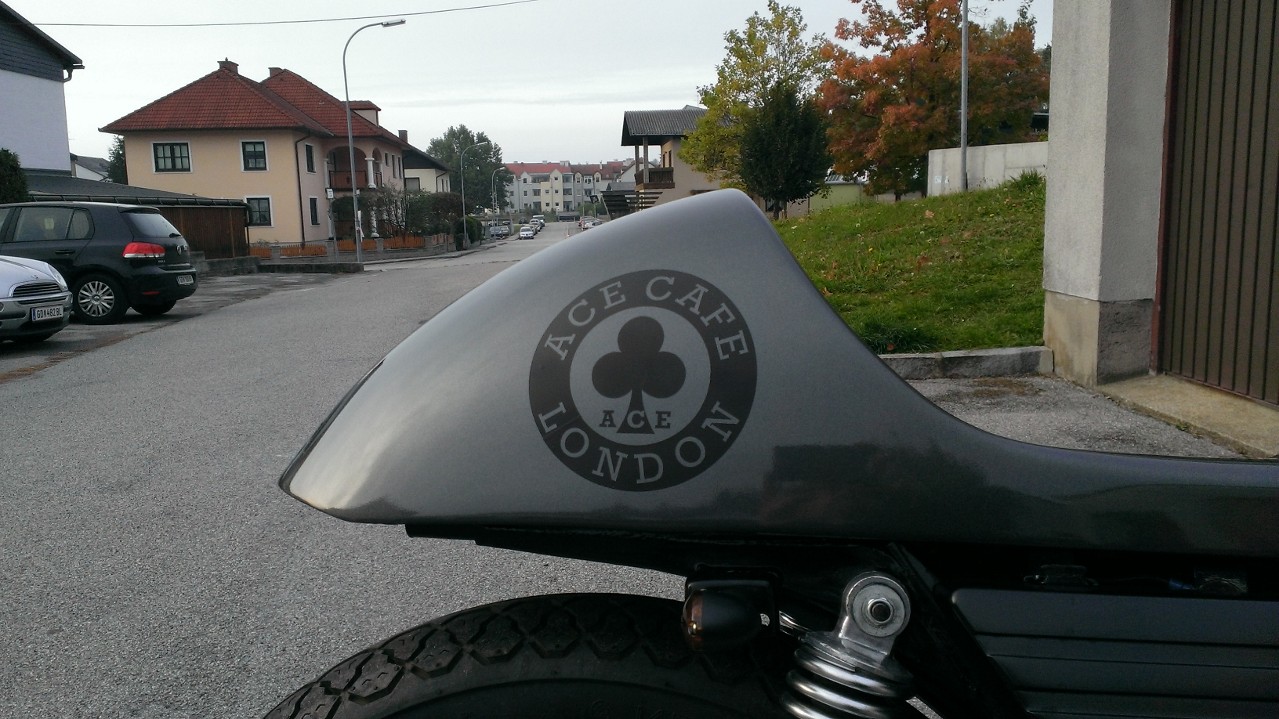 A few days ago Marc Schanza send us his  Honda CB400T Cafe Racer story and has received lots of positive reactions as a result of this. Which is good to hear! 🙂

Another result of this, is another story by another Schanza!
Stefan Schanza, has taken a Suzuki GS450S 1980 and turned it into this stunning Suzuki GS450S Cafe Racer you see here.
We are glad he send us his story to share it with you! 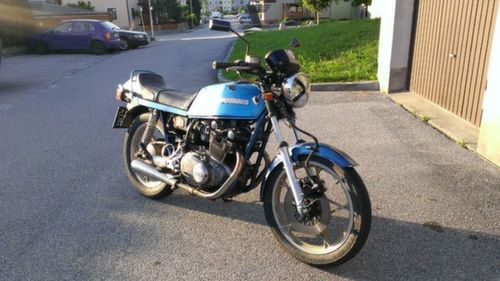 The first week I have bought the „racer“  … first it had to get a cooler look with the headlamp.

The basic was very nice, but the owners before did a bad job. Painted the whole bike, including frame absorbers and springs, in blue. This didn’t look that great!

There were also some technical parts that had problems that needed to be fixed. 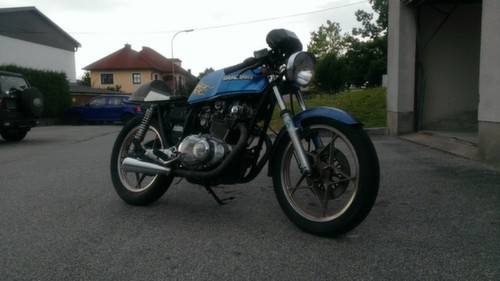 Put the absorbers in right position. Got blue paint off the frame, absorbers and springs.
The GS450 got a Fehling handlebar. Metalparts got polished and a MotoGuzzi-Style seat was taken as model fort he new cover.
Also the exhausts got into graphit 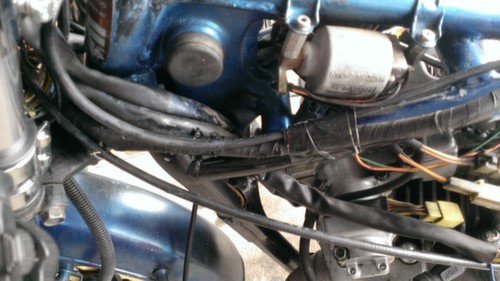 The electric was very well, but did get renewed as well, because of building a new plate for armatures.
Also the engine got a big service with checking all parts and renew some 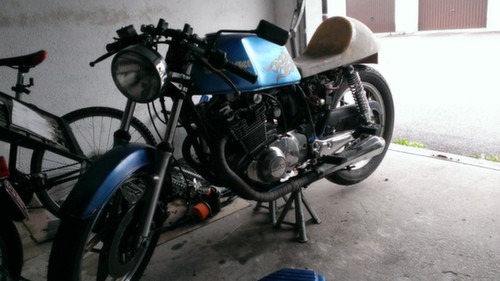 Stripping of armatures. The plate where the handlebar has been is here the old one. A new one got cleaned. The headlamp got more down near to the ground 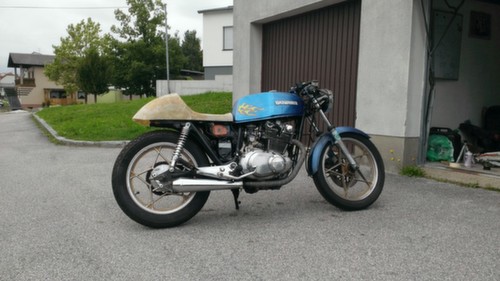 First time fitting the new built seat built with polyester. The frame got shortened as well. 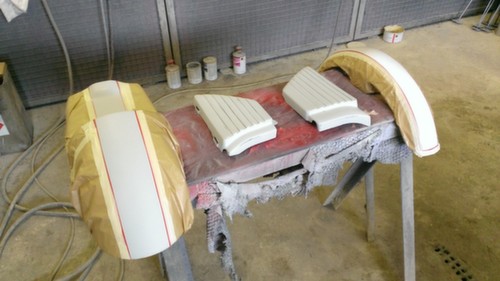 After a lot of days with dragging the parts they were ready for painting. The tank got cleaned from the original decals because of holes for screws. The side-covers got repaired because of some damages. 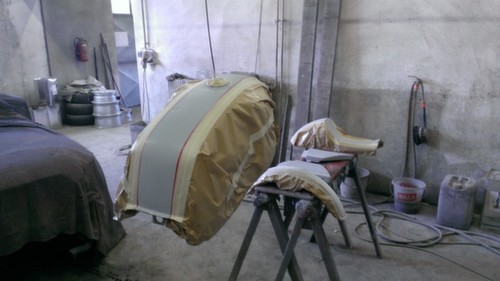 Paintshop too. First black got sprayed into the middle. After that „meteorite-silver-metallic“ from AstonMartin got onto the sides 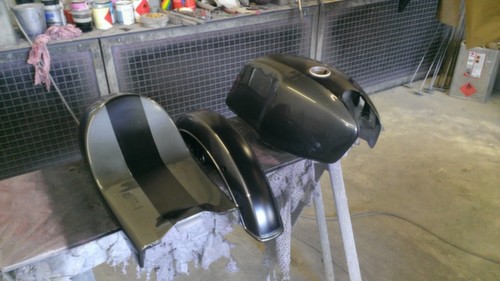 The first look of the painted parts! 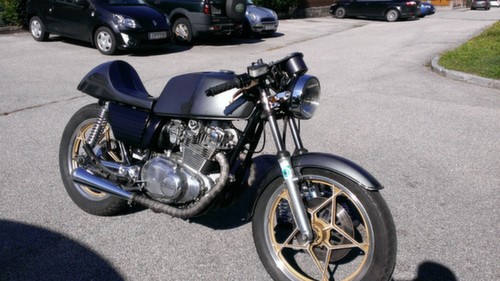 In the last week of September the CaféRacer was ready for driving and got all painted parts montaged and also the armatures.

However, it still wasn’t ready yet! 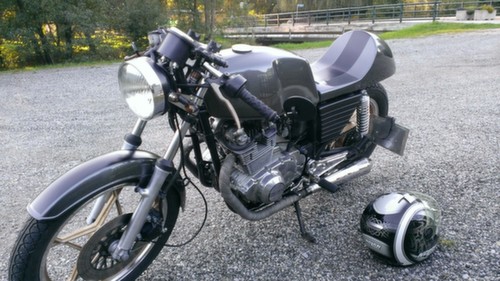 The numberplate  was positioned near the left side with light. Also a really small light was built under the back 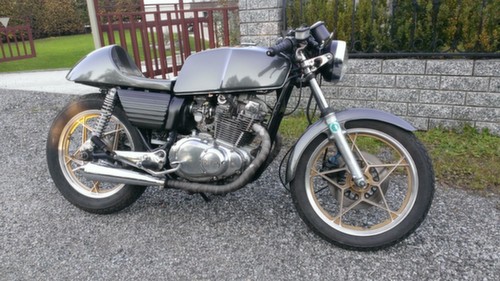 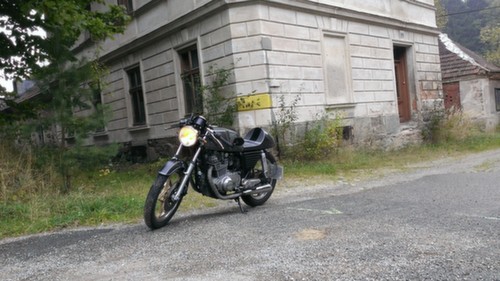 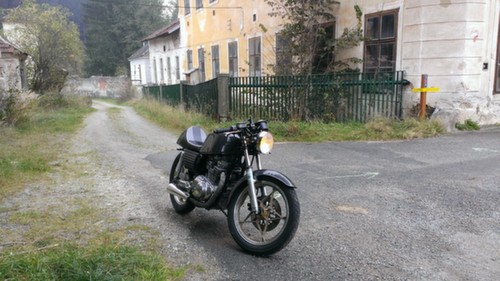 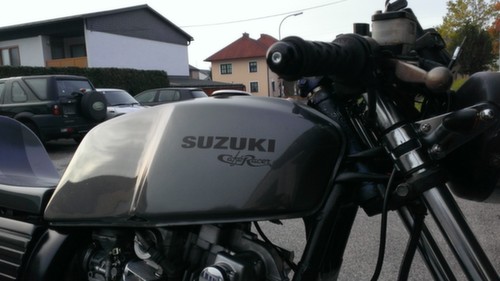 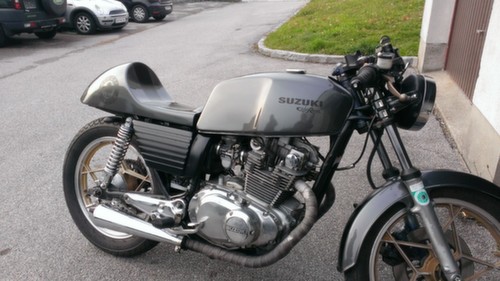 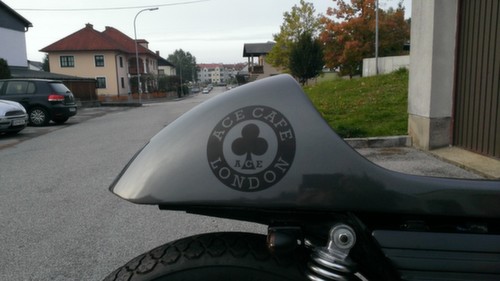 There is also a plan for fitting spoke-wheels.
Maybe a well fitting front fender could also be montaged.

The bike is still under construction and will get a fotosession for sure when its „ready“.

Thank you so much for your story Stefan! It is good to see that there are Café Racer Fans all over the globe!

If you like GS450 Café Racer Projects; we have another one for you here!

The GS450 was a Suzuki motorcycle produced in the early 1980s.

The 1980 Suzuki GS 450 is a 448cc engine street racer bike that was first created by the Japanese manufacturer Suzuki in direct competition with Honda’s CM series. It was put into production after its predecessor, the GS 400, which was manufactured from 1976-1981, and discontinued when its successor, the GS 500, entered production from 1979-2009. The GS 450 is considered a café racer, a relatively small bike that can be extensively modified to suit a rider’s taste.

The specifications of the bike include an 81.9 inch long, 19.5 inch wide frame, with a 31 inch seat height and 54.5 inch wheel base. Without fluids the bike weighs 385 pounds.   At a top speed of 100 miles per hour, this vehicle can take the rider where they need to go efficiently and fast with its quick start up because of the electric ignition, and no kick start at around 55 MPG. the bike carries up to 450 pounds. 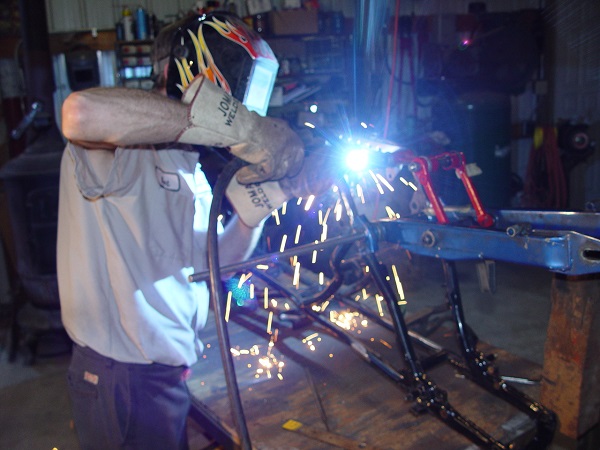 This Yamaha RD350 Cafe Racer is a one of a kind. Richard Weslow of Circle K Kustoms has just send us a inside story of the build and we couldn´t...
Read More 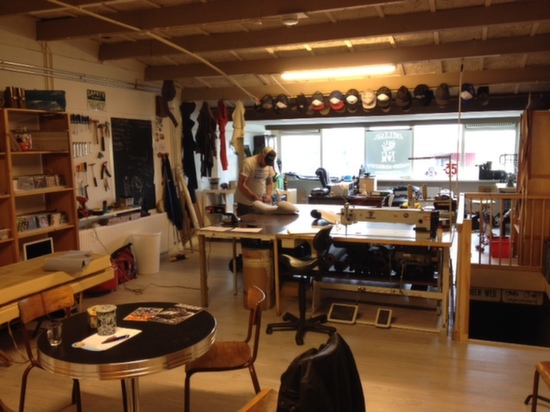 We are all working in our sheds and figure out how stuff works by trial and error. Once in a while we start up the ol' interwebs and go the...
Read More 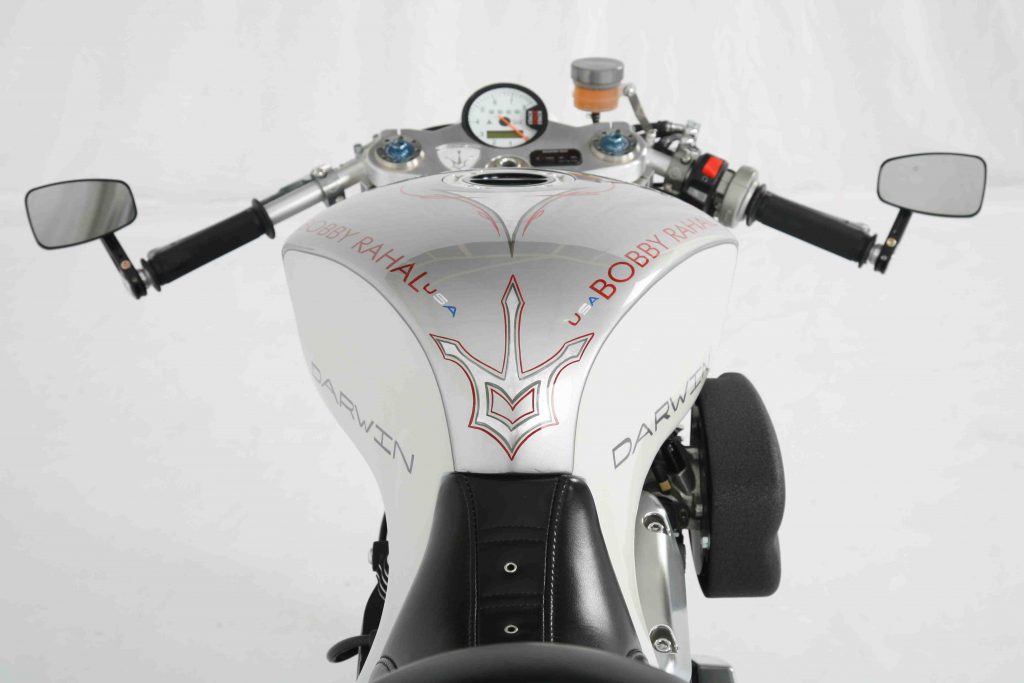 In 2011 Dar Holdsworth is called on the stage of the AMD World Championship Of Bike Building to receive his trophy for winning First Place in the Production Manufacturer Class...
Read More 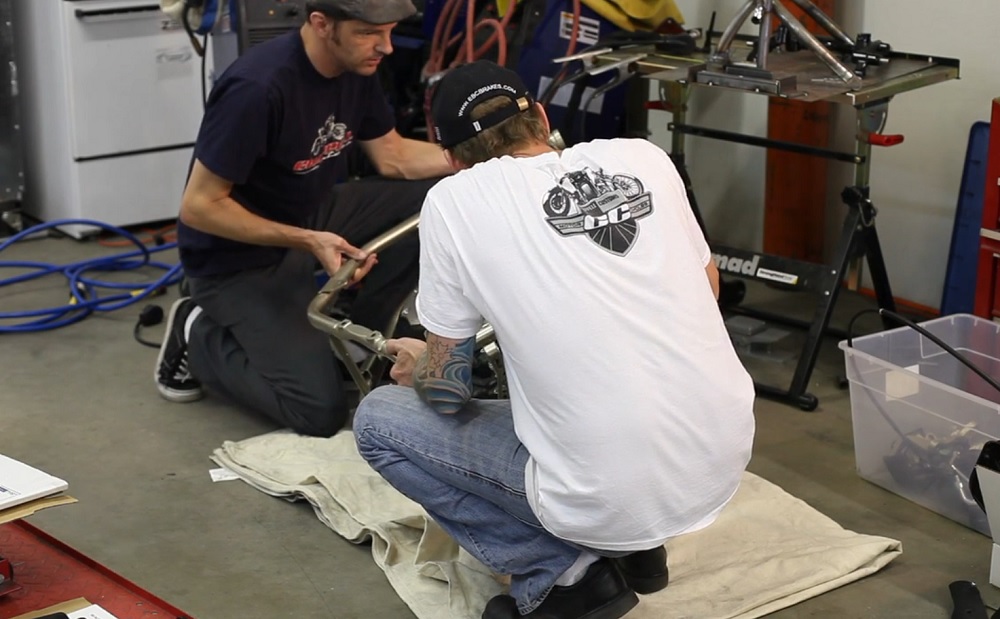 Yamaha USA contacted Chappell Customs to customize a 2014 Yamaha Star Bolt. We've already featured a story on Chappel Customs before and we love their work. The build is taking place...
Read More