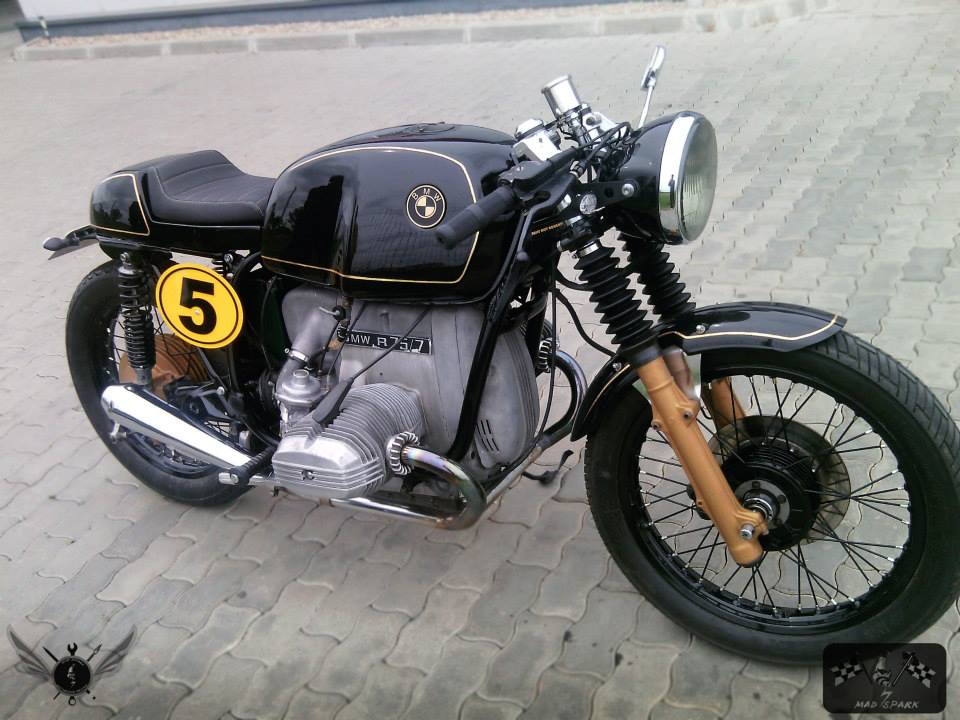 A few days ago we came into contact with Vajda Robert from Satu Mare, Romania. He has just started a small shop by the name Mad Spark Moto. He has recently build a beautiful BMW R75 Cafe Racer and was wondering if we would like to write about it… Heck yes!

“The Mad Spark Moto story began with a Yamaha xj 550 in September 2013. However the bike was rubbish, so a friend of mine saw potential in another bike and the search began for this soon to be beauty.”

They found this rare R75/7 in good condition this January for about 2200 Euros = 3000 Dollar, which isn’t a cheap start you would say. 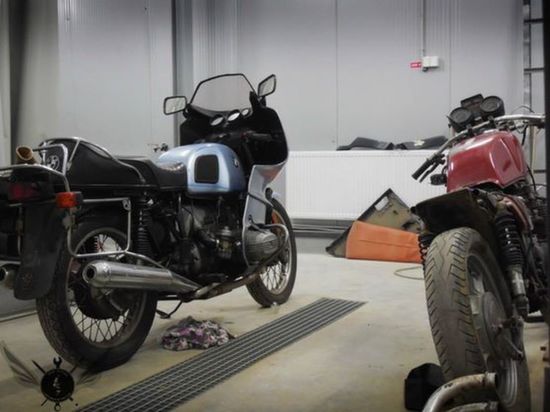 The project started by stripping down all the heavy parts of the Beemer, followed by measuring cutting ,welding ,sandblasting, painting and an engine rebuild. 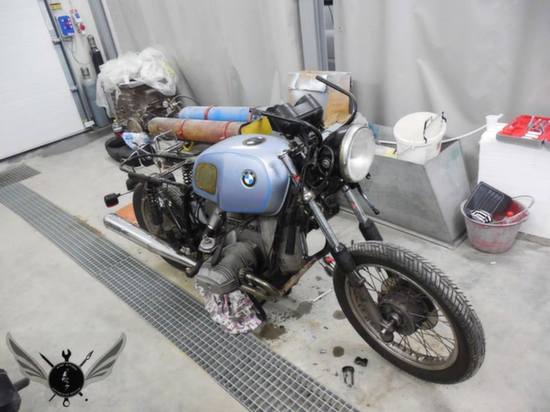 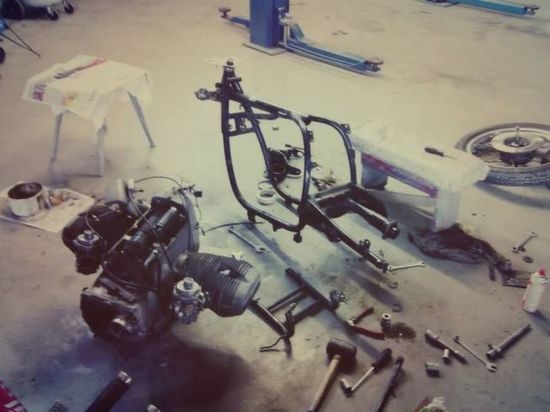 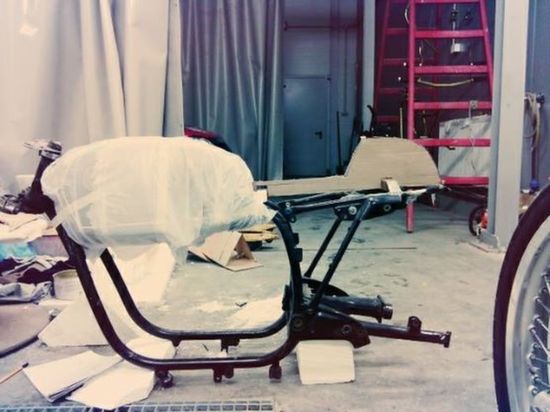 Mocking up the tail section 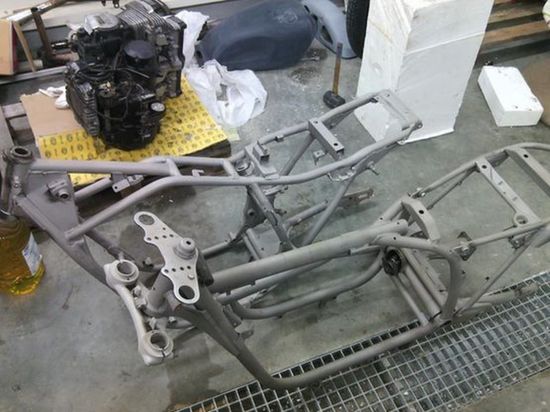 Sandblasting two frames. The one at the bottom of the picture is this BMW R75/7. 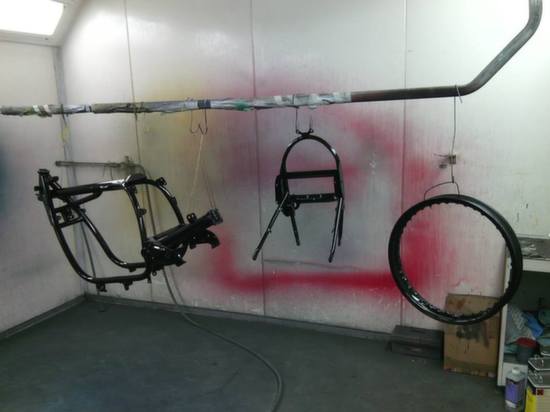 Painting the frame. Other parts like the rims and spokes were painted by hand. 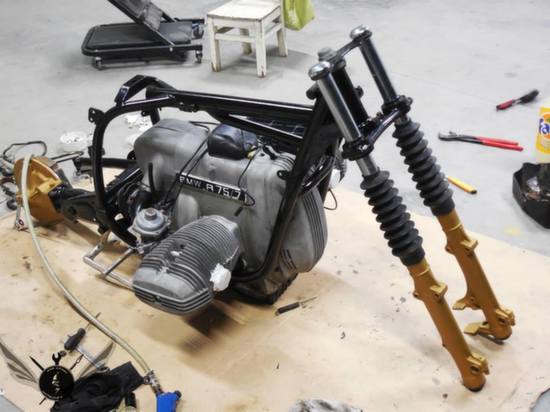 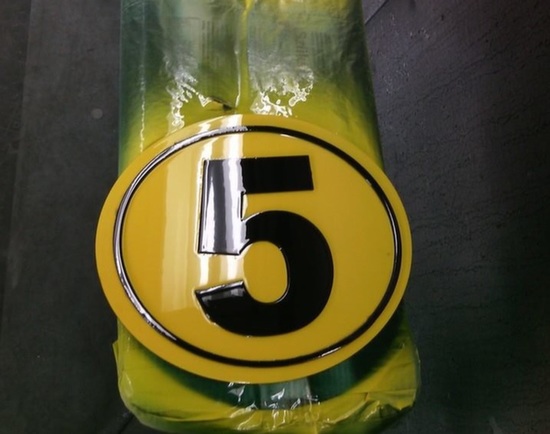 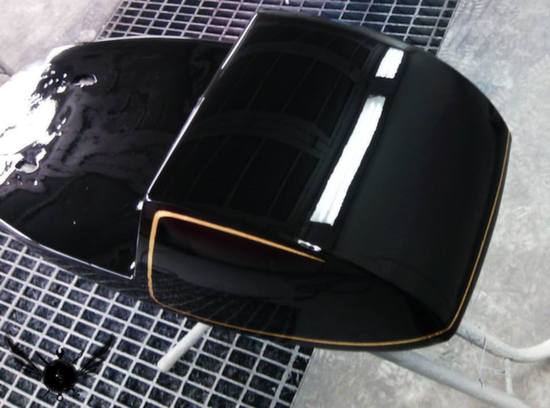 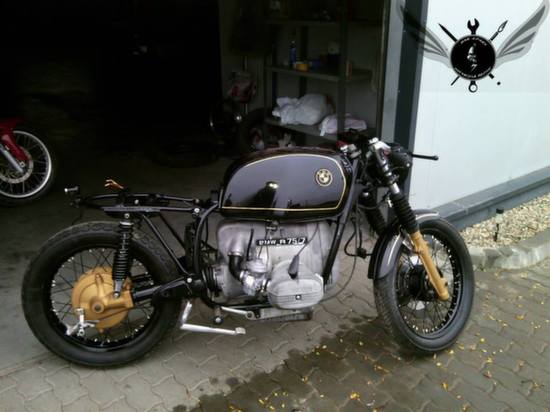 They painted the fueltank so the MOT would register it as a black motorcycle.

“The design of the bike is was kept simple and traditional with striping. The custom tail section  made by me from sketch to final shape. The tail section is designed to be removable and the shape of it is especially made for this bike because we coulnd’t  find anything that is close to theshape of the fuel tank.” 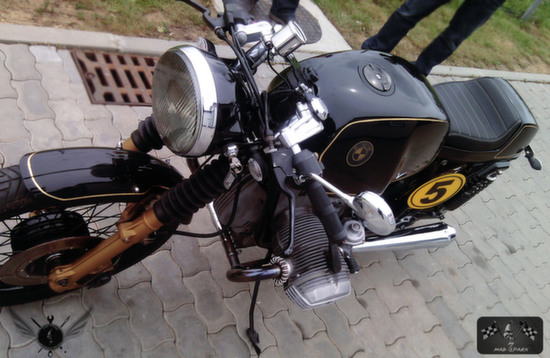 “The stripes are made with a gold leaf technique for a more vintage look. The engine is in perfect condition with a compression in both cylinders of a (very good) 4.5 psi.
The building process went according to plan and I am happy abput this, since this is  my first project!” 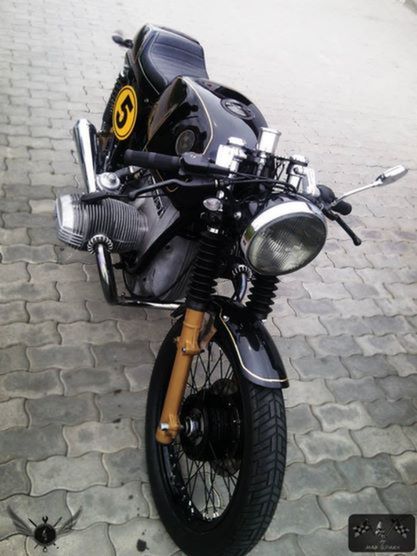 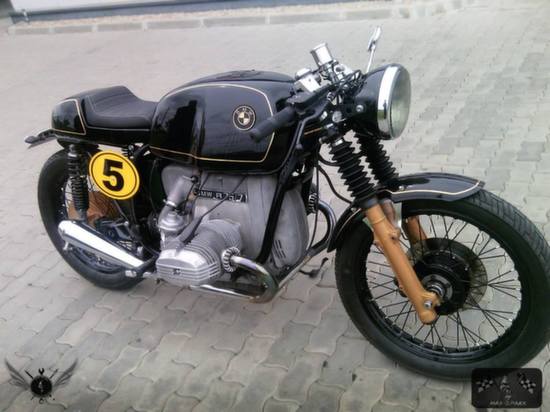 “I’ll be back soon with my own bike thats needs to be reassembled, so fingers crossed!”

To sum up the modifications
“We dropped the headlight and the ,lamp ears are handmade. The handlebars are 36mm. I have chopped the front fender and removed the middle stand. The subframe was adjusted  for the seat to mount on. Like said, the tail is handmade and is made out of  foam and its glued to a metal panel which is also handmade by my upholstery guy. (A very talented guy! ) Luckily it was a very good bike to start with and this made it a lot fo fun building it! ” – Vajda

The BMW R75 is a World War II-era motorcycle and sidecar combination produced by the German company BMW. In the 1930s BMW were producing a number of popular and highly effective motorcycles. In 1938 development of the R75 started in response to a request from the German Army.

Preproduction models of the R75 were powered by a 750 cc side valve engine, which was based on the R71 engine. However it was quickly found necessary to design an all new OHV 750 cc engine for the R75 unit. This OHV engine later proved to be the basis for subsequent post-war twin BMW engines like the R51/3, R67 and R68.

The third side-car wheel was driven with an axle connected to the rear wheel of the motorcycle. These were fitted with a locking differential and selectable road and off-road gear ratios through which all four and reverse gears worked. This made the R75 highly manoeuvrable and capable of negotiating most surfaces. A few other motorcycle manufactures, like FN and Norton, provided an optional drive to sidecars.

The BMW R75 and its rival the Zündapp KS 750 were both widely used by the Wehrmacht in Russia and North Africa, though after a period of evaluation it became clear that the Zündapp was the superior machine. In August 1942 Zündapp and BMW, on the urging of the Army, agreed upon standardization of parts for both machines, with a view of eventually creating a Zündapp-BMW hybrid (designated the BW 43), in which a BMW 286/1 side-car would be grafted onto a Zündapp KS 750 motorcycle. They also agreed that the manufacture of the R75 would cease once production reached 20,200 units, and after that point BMW and Zündapp would only produce the Zündapp-BMW machine, manufacturing 20,000 each year.

Since the target of 20,200 BMW R75’s was not reached, it remained in production until the Eisenach factory was so badly damaged by Allied bombing that production ceased in 1944. A further 98 units were assembled by the Soviets in 1946 as reparations.

However the standardisation programme meant that machines that were produced by BMW and Zündapp used 70% of the same components. This simplifies the supply of spare parts for these vehicles, many of which are still in the hands of historic motorcycle enthusiasts. These vehicles are still highly desirable as collector’s items because of their complex and durable technology, and are correspondingly expensive. A well-restored R75 can be still used for everyday purposes, on or off-road without problems.

In 1954 a small number of modified R75 models were produced at Eisenach (then in Soviet-controlled East Germany) for testing under the designation AWO 700, but were not put into full production. 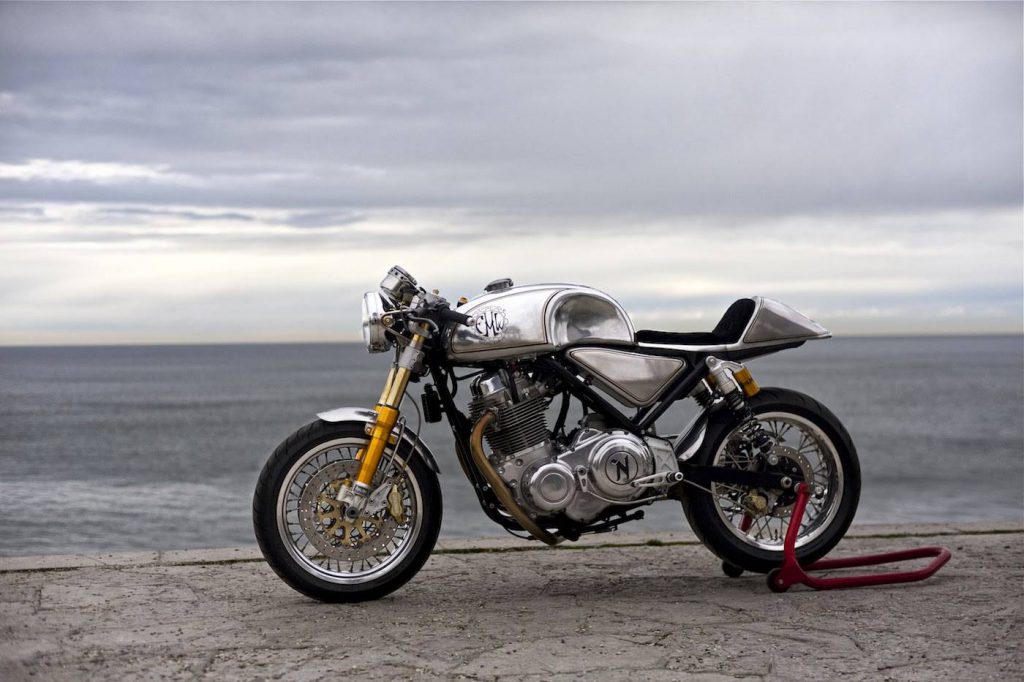 The Italian guys of FMG (Fugar Metal Worker) Motorcycles truly made a special Norton Commando Cafe Racer, based on the 961 Commando that is. With the name "Metal Slug". This...
Read More 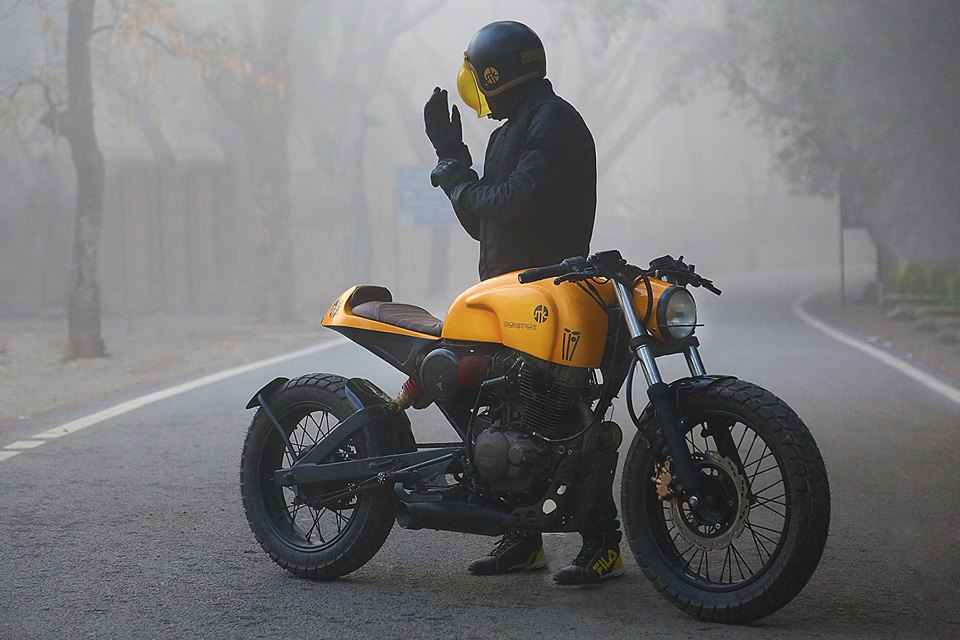 We like to talk with Cafe Racer enthusiast from all over the globe and this time we interviewed Samik Chatterjee of Motokraft Customs in India. They built a Cafe Racer on a...
Read More 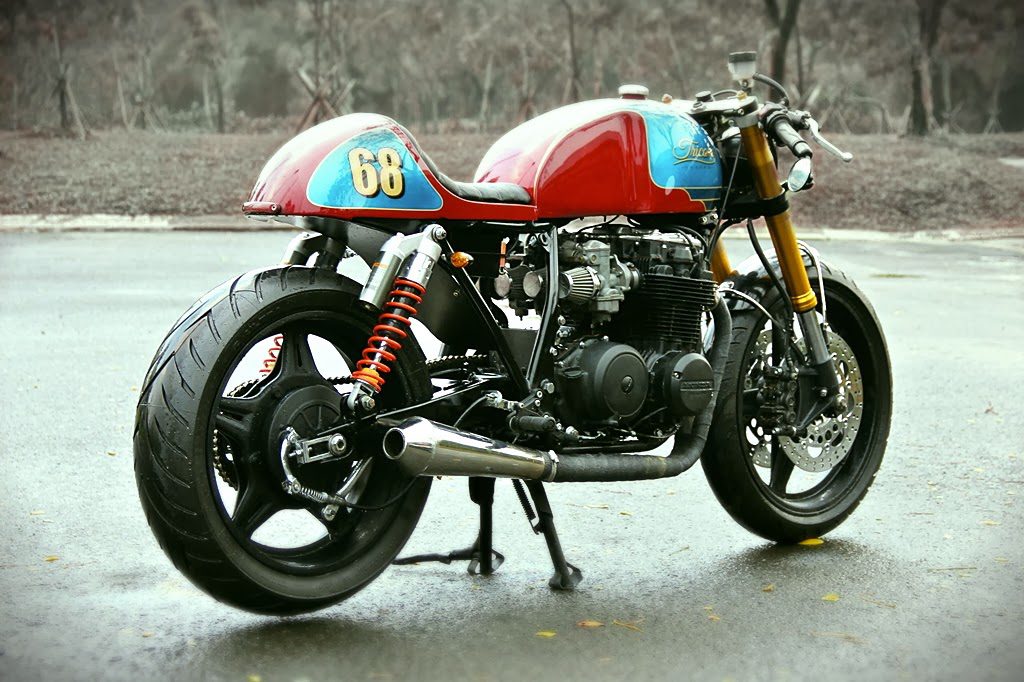 The Indonesian guys of Studio Motor do know their way around the garage. Check out this beautiful Honda CB650 Cafe Racer called "The Tricore" Complete Yamaha R6 front end, including...
Read More 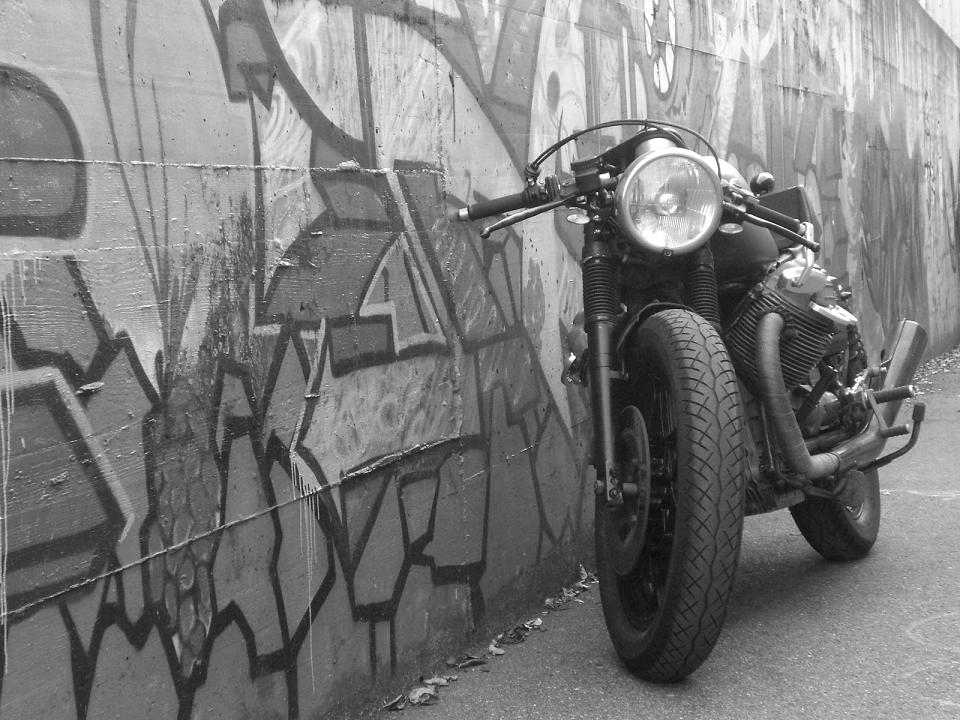