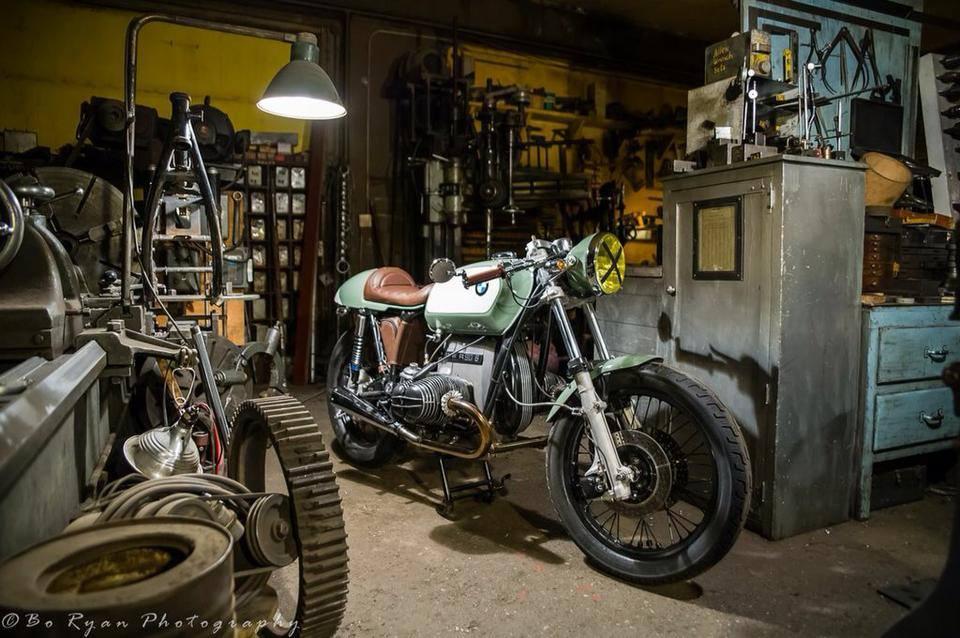 Erik Alaskan; damn, this guy has made one fine BMW Cafe Racer based on a R90.

This is his story, he shared at the Bike Shed.

“I purchased the R90 in April and intended to ride the bike all summer before starting my cafe project. Every time I rode the bike I grew more unsatisfied because it was not the bike in my mind. 17 garage beers with friends later, the bike was in ziplock bags.”

“I have always had an affinity for BMW motorcycles and opposed cylinders – probably rooted in my previous aviation career. Finding a candidate for restoration in Alaska was the first challenge. Bikes in Alaska have the tendency of being used more than the average lower 48 (states) bike. I started calling every motorcycle person I knew inquiring about BMW airheads and who might have one for sale. Ironically, it was a Craigslist alert on my phone that led to the purchase of the R90.” 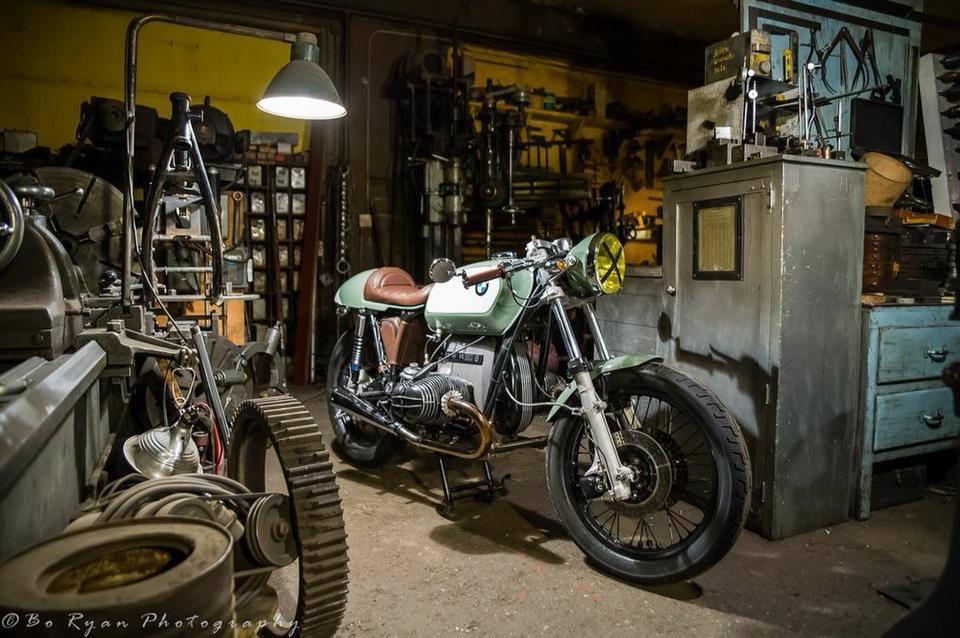 “I showed up to test the bike and met a gentleman with a peculiarly German first and last name. We chat and I try to haggle but it’s a halfhearted effort. I know I’ll pay asking price for the damn bike because I’ve already envisioned removing the boat anchor fairing, luggage bags and tractor seat. After we shake, the sellers demeanor changes and he invites me to look in the garages. Turns out his 82 year old father was the owner of the local BMW motorcycle dealership years prior. Naturally, I burnt my kitchen pass at home because I disappeared for the next two hours. Connex containers full of BMW bikes and parts littered the property while the real history was in the garage. Walls of BMW tools, posters, a sidecar rig and several complete bikes. I knew I was in the right place when I pulled open a drawer and it was full of old San serif BMW roundels. I almost came home with an R27 also but I knew the motorcycle clause in my pre-nup would never hold up.”

“The old German family and I became friends during the purchase of the bike. I felt I had purchased something special and this, in turn, led to the personal obligation to make the bike something special. The old German patriarch never approved of what I did to “perfectly good German engineering.” I joked with him that, “I’d trade a little of that engineering for a few style points.” He didn’t even crack a smile. Despite our different perspectives on the same motorcycle, he is always eager to offer advice about bikes and life. I received a surrogate grandfather with my motorcycle.” 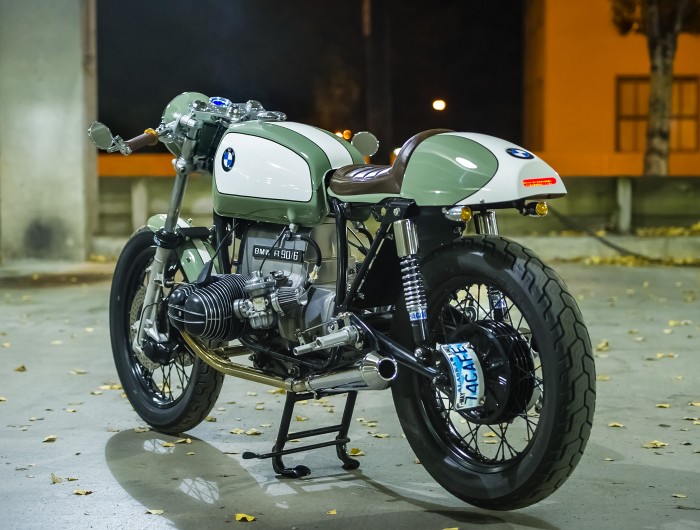 PSSST: If you like a different kinda look for your headlight, or want it to be yellow as well? Perhaps this will be a nice read for you! 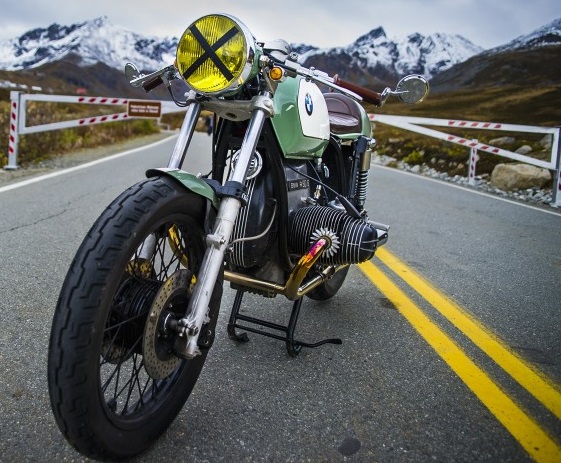 “The theme of this build was New Vintage. I wanted a super clean, unique bike that would turn heads and sound refined. The pastel green and cream white originate from my love of everything old from the 60′s. Being 33 myself, sometimes I feel I was born in the wrong era. The brown striping was hand painted by master sign painter Perry Cowles at Perry’s Rod & Custom. This guy is sarcastic and candid and that can be a lethal combination for anyone’s ego. He was the inspiration behind the axle-mounted license plate and and integrated LED taillight. He’s a great friend and takes time out of his day to chat about any project on your menu.” 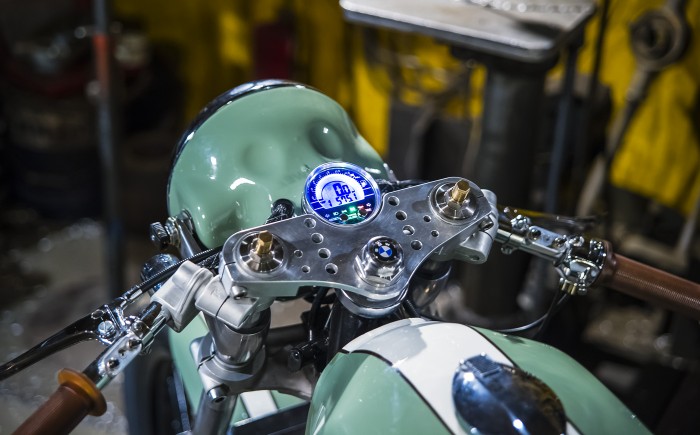 “Me and few buddies call ourselves Northern Cafe Racers on Facebook. Just a few guys with everyday lives building cafe bikes in our garages in anticipation of the incredible Alaskan riding season. The striped cylinder heads were the result of another beer-fueled garage meeting. Just as women wear horizontal stripes to make them look taller, I wanted the cylinder heads to appear even wider by employing this same visual trickery.”

“All frame and wheel parts are either power coated or bead blasted while every bearing and gasket was replaced along the way. While I had the bike fillet open I upgraded the alternator, diode board and went with electronic ignition. The dual disk conversion was already complete so I simply rebuilt the MC and replaced the rear shoes while using stainless hardware throughout.” 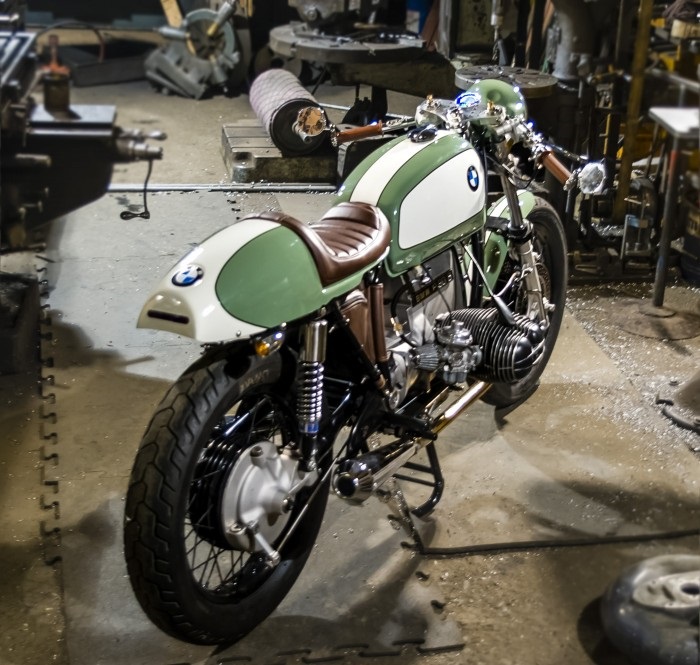 “The cockpit has the highest concentration of modifications. I used Japanese micro-switches because I am horrified of too much chunky plastic. I spent time in Japan so thankfully securing these switches was a little less difficult. The top plate started as one of Boxer Metals high quality plates. I wanted the data and appearance of an Acewell but I didn’t want gauges protruding like a teenagers pimple. After a few beers with friends at the machine shop, we had the top plate modified to host the Acewell flush. It’s amazing what booze and pizza gets you in a small town.”

“Garages are not for four wheeled vehicles in Alaska. The R90 is getting a few winter upgrades while I also start the next bike. I’m building a /2 conversion with lots of 1950′s flair. It promises to be another great blend of New Vintage. Like Northern Cafe Racers on Facebook for R90 build photos and progress photos of the next bike.” 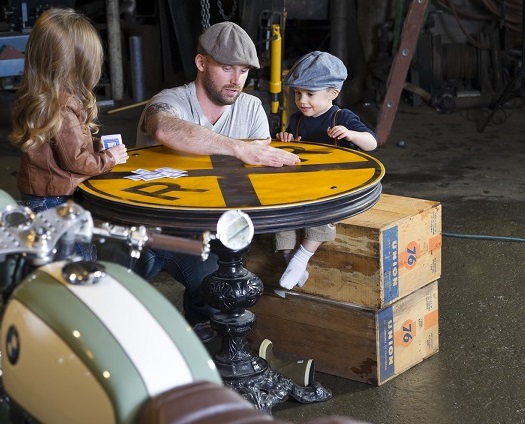 The BMW R90S is a sport motorcycle that was produced by BMW between 1973 and 1976. The first United States AMA Superbike Championship was won in 1976 by British rider Reg Pridmore on a R90S.

There were three series of R90S:

The first series of R90S sported a distinctive two tone paintwork (Black/Smoke) called “TT silberrauch” or “TT smoke silver” with adhesive gold pinstripes, which later changed to hand painted pinstripes.
The R90S sported a small but effective factory-fitted Bikini Fairing, which held two dial instruments (clock and voltmeter) in addition to the normal instrument binnacle’s speedometer and tachometer. The first series R90S was only equipped with a 238 watt alternator, while the other “/6” machines had at least a 280 watt alternator). The third series R90S alternator was upgraded to 250 watt.

The bike also possessed an adjustable hydraulic steering damper activated via a knob located on the steering head. Suspension is by telescopic forks at the front and twin shocks at the rear. The rear dampers were adjustable for preload, which is the only suspension adjustment available. The R90S came equipped with standard 38 mm Dell’Orto ‘pumper’ carburetors, differing from the previous 26 mm Bing slide carbs or 32 mm Bing CV carbs of the standard “/6” and “/7” 800 cc, 900 cc and 1000 cc series machines. Later 1977 to 1980 1000 cc machines sported 40 mm Bing CV carbs. The R90S differed from the R90/6 by sporting a 9.5:1 compression (R90/6 was 9:1) and 38 mm DellOrto round slide carbs instead of the 32 mm Bing CV carb on the R90/6.

There are numerous differences on the three R90S series. On the first series the brake discs were not drilled and the handlebar switches are the old “/5” series style. The first series was also still equipped with a “/5” series kick start lever and the front axle diameter is smaller than that of the second and third series.

The bike’s visual design was overseen by Hans Muth, who was asked by BMW to create a machine with a unique presence far removed from the staid image offered by previous BMW offerings such as the R69S. This designer later went on to design the R65LS, and also the Suzuki Katana. The R90S possessed a redesigned seat, with a small, styled ducktail, which added a second underseat storage space to add to the original underseat tool tray suitable for lightweight waterproofs, maps, or gloves.

Two 230 mm drilled discs were gripped by pivot-pin ATE callipers, with a 200 mm drum on the rear wheel. The front brake’s cable activation system for all BMW “/6” series bikes, including the R90s, is also unique. The master cylinder is located on the top tube of the frame below the tank with a standard brake fluid reservoir and is activated by a cable from the handle bar brake lever. The argument was that this system offered greater protection for the master cylinder in the event of a crash. Later “/7” machines reverted to handlebar mounted Brembo master cylinders, with a single disc brake replacing the rear drum.

The R90S came standard with a full toolkit, a hand pump, a first-aid kit and even a small hand towel with an embroidered BMW logo. A small number of R90S motorcycles, were fitted with Krauser 4-valve heads, providing increased power. The bike was originally equipped with a phenolic disc and spring engine crankcase breather, which was superseded by a reed valve design on the “/7” series. An original R90S (as with many “/5” and “/6” machines so fitted) makes a ‘plopping’ noise at idle as the crankcase breather manually opens and closes: later reed type breathers retrofitted to earlier bikes removed this feature.

A H4 headlight provided illumination. The switchgear was upgraded in 1975 from the previous “/5” system. The indicator switch now operated on the vertical plane, rather than the horizontal one used by most other manufacturers. As of 2009, both BMW and Harleys continue with different switchgear to manufacturers in this regard. The ignition key is placed on the left headlight mounting point. The steering lock is mounted in the steering headstock.

From 1973 to 1976, 17,455 R90S models were sold. The R90S became the R100S in 1977, which maintained the R90S bikini fairing, but ran the full 1,000 cc engine, 40 mm Bing CV carbs, and altered paintwork. The mantle of the lead BMW factory twin was passed to the R100RS, which by now sported a full fairing (note: ‘specials’ such as the 4V Krauser and Fallert BMW’s are not compared in this article). Other factory variants such as the R100CS were also produced in later years, sporting spoked wheels and black-painted square valve covers; as a sort of ‘licht’ derivative that was available only in black bodywork.

A later example of the R259 oilhead BMW, the R850/1100R, sported a similar two-tone smoke grey paint scheme in homage to the original BMW ‘superbike’ color scheme.
Two R90S bikes placed first and second at the very first AMA Superbike race at Daytona in 1976. On the first place bike was Steve McLauglin and on the second was Reggie Pridmore. The first place bike is now in the BMW Mobil Tradition Collection.

We've just received a Facebook Message about a Yamaha XS750 Cafe Racer, and it is a worthwile share! Today we do not show you a trillion pictures, but a movie...
Read More

Today we will bring you the story of Mick, from M&M Custom Denmark and his Suzuki GS 550 E Cafe Racer with a F-You Attitude! The Story behind M&M Custom...
Read More 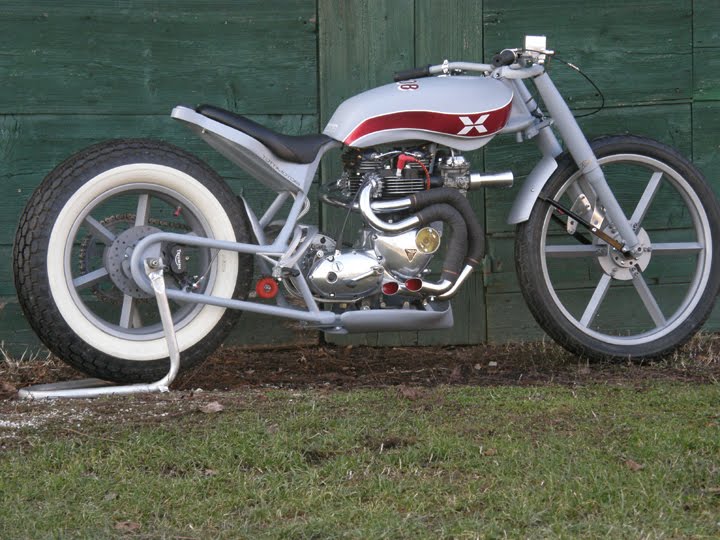 Hmmm I guess you do not even have to look closely, to see something stange about this Triumph Cafe Racer , or well, should we call it a hot rod? What...
Read More